Before the all-state accolades, before the injuries, before middle school, high school, college, and all the difficulties that followed, Benjamin Lee Silver was a brother—to Aaron, three years older—and a son, to loving parents Paul and Jamie. Born in San Francisco, California on November 23, 1992, Ben was the kind of kid whose smile, nearly constant, was contagious. Energetic and creative, Ben jumped into any new endeavor with cheerful abandon, unafraid of embarrassing himself. If something was exciting, if there was the potential to improve himself, why not try it?

After moving to Downers Grove, Illinois in 1998, Ben dabbled in youth soccer before following in brother Aaron’s footsteps and joining the cross country and track teams at Herrick Middle School. A star from the outset, Ben was a class above his junior high competition. Despite being limited by injuries and minimal formal training, Ben shattered the school 1600 meter record with a 4:40.6, a time rarely approached by runners that age. In his freshman cross country season, he slotted in as Downers Grove North’s top runner, a mantle he’d hold for his four years in the program. In fact, he ran 15:19 the first time he ever raced three miles, outkicking a handful of returning all-state upperclassmen at the Leavey Invitational. A couple of weekends later, at the famed Peoria Notre Dame Invite, Ben became the first freshman to break 15:00 at Detweiler Park since Kevin Havel’s fifth place finish at the state meet in 2004. Unfortunately, his season was derailed by injury only days later.

Behind all of Ben’s accolades—3x All-State in cross country, 1x All-State in track and field, twice top 20 in the Footlocker Midwest Regional—was the untold story of how little he actually ran during his high school career. Never physically healthy for more than a couple of consecutive months, many of Ben’s finest performances came on unimaginably limited training. Both his junior and senior cross country state meet performances came on approximately three weeks of training. As captain, aware that his fast time was necessary for DGN’s qualification—he was determined to run no matter what, reclaim his top spot, and lead the team downstate. No one who saw him a month before the 2009 state meet, hobbled and unable to run even a block, could have imagined he’d lead the 3A race through two miles. Few would have believed a 10th place finish possible with only two hours a day on an elliptical trainer and less than 100 miles on his feet, still fewer would’ve guessed he’d make it through two miles of the demanding UW-Parkside course in tenth place, the last qualifying position for Footlocker nationals, before fading. By any metric, these performances were incredible—with some insight into what got him there, they were almost unbelievable.

The final, and perhaps finest, high school performance in Ben’s career came during his senior season of track. A cocktail of injuries and poor conditions meant Ben—already 3x all-state in cross country—had never qualified to go downstate for track. Injured and unable to run since indoor conference, it seemed impossible he’d ever make it to Charleston. He returned to running the week of conference, determined to make one final effort. On one week’s running, he managed third in the stacked West Suburban Silver conference, outkicked by future NCAA All-American Malachy Schrobilgen and his teammate, Jack Stapleton, both of Oak Park-River Forest. The next weekend, facing the 9:32 qualifying time for the state meet (only a few seconds slower than his personal best), Ben finished second behind Hinsdale Central’s Billy Fayette, running a brave and almost inconceivable 9:27.62. Relegated to the first (and slower) heat of the 3200 meters at state, Ben ran possessed, with a mission: ticking off lap after lap of even splits. He led wire-to-wire and finished in 9:18.91, a personal best and eleven seconds ahead of his nearest competitor. Incredibly, only seven athletes in the faster heat could better this solo performance on three weeks of training—yet again Ben stood on an IHSA podium, this time in eighth.

Eager to continue his running career while pursuing a top-notch education, Ben accepted a scholarship to compete and study at Miami University of Ohio, a mid-major Division I school with esteemed academics and a storied athletic history. Beleaguered once again by injuries, perhaps not helped by his incredible state track meet performance on a bad ankle, he would only compete in a few races for the program during his years in Ohio. Instead, he turned his laser-like focus and ambition toward academics. Successful as a freshman but unsure what path to follow—what major, what career field best suited him—Ben began to feel the stress of intense study paired with fear of losing his scholarship should he not be able to train and race. He moved between majors, from general engineering to paper science to biology, never managing to find the right fit.

Eager to redefine himself academically, Ben took even more advanced coursework as a sophomore, faltering for the first time in his education. Though he ran a couple races and trained with the team, he could not stay healthy—constantly in pain, he decided to end his competitive running career to focus on school. Dealing for the first time with feelings of intense loneliness, unable to perform in the athletic field that had so long defined him, he considered moving home halfway through the year but decided—much as he’d decided as an athlete—to push through, sure he could succeed with smarts and incredible willpower. Unfortunately, he ended the semester one credit hour short of the requirements to maintain his scholarship and around this time began to express lonely, dark, and depressed feelings that worried his brother and parents. He drifted away from his college and high school friends. Though many college students struggle to adapt, Ben’s difficulties proved more complex—at the end of the summer before his junior year, he had his first psychotic break, unable to think clearly and consumed by paranoid thoughts and delusions. Eventually diagnosed with schizophrenia, an often misunderstood and misdiagnosed illness with over 20 million annual cases globally-most commonly in adolescents and young adults, Ben began taking medication. Though this helped, he still spent the next year and a half in and out of mental-health facilities.

Unable to recognize himself among all the dark feelings, Ben first attempted suicide in early summer of 2013. Though he physically recovered, the following months were a parade of hospitals and facilities, with Ben and his family navigating the circuitous and often counterintuitive mental health system in our country and state-despite a more open mental health dialogue in 2015 than in the past, it’s still in credibly difficult getting productive help and support for individuals suffering from mental illnesses compared to services offered to those with physical maladies. Ben spent two and a half months at Hopewell, a therapeutic farm community in Ohio, but eventually had another suicide attempt and returned to Illinois. Through this dark period, his entire family fought for him—though often unrecognizable as the brother, son, cousin, nephew, and friend we all loved, on good days Ben was present and yet at other times he was unreachable, angry and convinced that everyone and all doctors and medicines were against him. In a medical system that has trouble understanding schizophrenia his condition never stabilized or improved. Despite meeting criteria for hospital discharge, no intermediate care facility would take him. Ben’s history defined him as a “risk.” Finding no escape from the voices in his head, in the summer of 2015 Ben ended his life.

At a Celebration of Ben Silver’s life, over three-hundred family members, friends, teammates and well-wishers from around the country gathered to share their memories of Ben. For all of his twenty-two years, he was the kind of person who reached out and made a difference, in ways both large and small, to people around him. Ben was very passionate about community—whether genetic, geographic, athletic, educational or social—and we all realized the best way to keep Ben’s memory alive was to keep the celebration going year-after-year, to bring people together regardless of their different interests and varied walks of life and share in Ben’s passion for running. Together we’re working to celebrate in a way which he would approve: sweating it out on the track in the name of effort, community, and love-regardless of speed. A race, a walk, a party, a way to raise awareness of schizophrenia and help others beset by similar difficulties: Ben’s Memorial Mile.

Join us on Saturday, July 23 at Downers Grove North H.S. to help raise money and awareness for mental health! 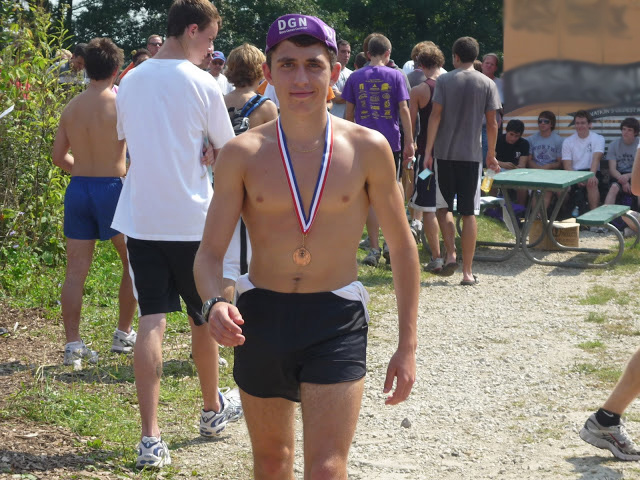